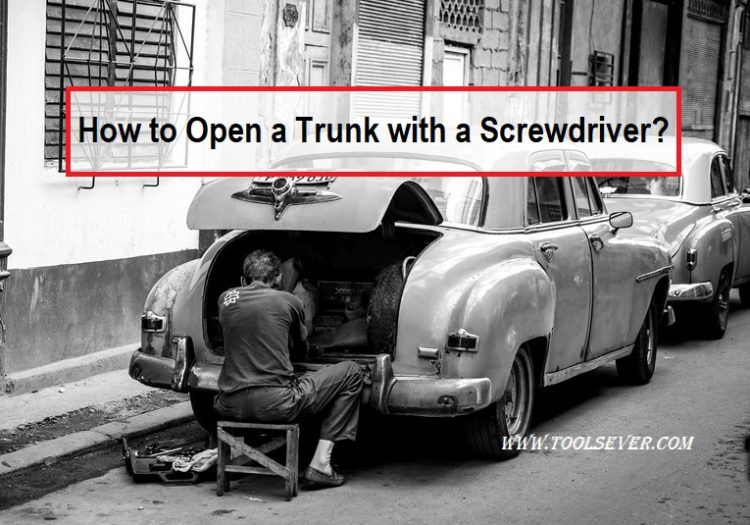 A trunk is a car’s main storage point. In other words, it is referred to as a boot. Common ways of opening it include by use of a key or even by remote sensors from the car’s central locking system. However, there are instances when none of the above ways of opening are not available. You will then be forced to use other means to open it. A screwdriver would be the most appropriate too. So how does one open a trunk by use of a screwdriver? Read on for more information.

Contents show
How to open a trunk with a screwdriver?
Move the vehicles from seats.
Unscrew the bolt under the car’s back seat.
What happens when inside the trunk?
Replace the seats.
Why should the trunk be opened?
What are some of the common things which are carried in a trunk?
Do all the cars have trunks?
Conclusion.

How to open a trunk with a screwdriver?

If you look down below the front seat, there is a knob. This can be either pulled upwards or pushed downwards to allow the front seat to be pushed either forward or backward. Since you want to open the trunk, press the knob as appropriate and pull the front seat forward. They moved by sliding over a piece of horizontal metal. Move the seats as far forward as possible until it reaches the end. At this point, bend the seats forward so that you will be able to see a bolt beneath where the seat is usually located.

After having the front seats moved and folded, lift the back site. Below it is a bolt that is found on either side of the chair. Loosen the screws by use of either a screwdriver or even an adjustable wrench. Turn the screws in an anticlockwise direction to loosen them and eventually to remove them. This is to allow you to remove the back seats. If there is insulation at this point, you will need to pull it out to gain access to the trunk. You can then crawl inside the trunk. Ensure that you have a flashlight as you will need it in the next process.

What happens when inside the trunk?

Once in the trunk, you may face some serious darkness. You will, therefore, need a source of light. There is a metal that is placed near the trunk lock. It might not be visible without a light. You can use a flashlight to find it. This metal is holding back a square box that contains the trunk lock. To open the lock, turn it in a clockwise direction. Finally, pop open the trunk. Confirm if the trunk is open before coming out of the car.

Return the front seats to the original position. Press the knob and pull back the seats. Make them stand in a normal position in readiness for driving. You are cautioned not to drive the car without fastening the back seats. This is to avoid damages to other car parts.

Are there other ways of opening the trunk apart from the use of a screwdriver?

Yes, there are other methods of opening a trunk without necessarily using the screwdriver. With the improvement of technology and the imposition of relevant laws, newer car models can be opened easily. In the USA for example, the National Highway Traffic Safety Administration’s Federal Motor Vehicle Safety Standards passed a law to have the trunk opened from the driver’s position. This was occasioned by the high number of child deaths in the car trunk.

The law demanded that cars be fitted with interior trunk release. The release latch can be easily identified. To open the trunk, just pull the latch and the trunk is flanked open. This allows the trunk to be opened easily and in a very short time without going through the long process.

The US laws did not exclusively ban the vehicles without an interior. Rather, it demanded that such vehicles be fitted sensors. Sensors can sense the presence of a human being and open the trunk automatically. Such vehicles are even safer as compared to those with interior release mechanism. This is because sensors are activated when the car thinks that a human being is in the trunk.

Why should the trunk be opened?

A trunk is the car’s main storage point and carriage. When you go shopping in your favorite mall, you will need to place your items in the trunk. Cleaning the car also will need you also require that you open the trunk.

In some cases, children playing in the car may end up locking themselves in the trunk. Since you may not notice such incidences easily, then fatalities always tend to arise. Children might not be aware of how to open the trunk to escape.

As the car owner, you have to always be careful not to leave your car open, especially the trunk when you are not around. It is not safe.

What are some of the common things which are carried in a trunk?

Apart from normal shopping, the trunk of a car can carry other several items. Key among them are:

Do all the cars have trunks?

Yes. All the cars have trunks. In some cases, some even have two trunks. The number of trunks depends on the size of the car. Typically, a trunk is located on the rear part of the car. It is just but an open compartment where luggage and car spare items are kept.

Opening the trunk of a car by use of a screwdriver sounds to be so mechanical. However, that is how it is done. The procedure begins by moving the front seat, taking off the back seats eventually opening the way leading to the trunk. Once inside, turn the square in a clockwise direction and pop open the trunk. Ensure that you fasten the back seats before driving the car.